Assessment and offset of 2021 CO₂ emissions of TIM Group websites.

Goals: Decarbonization of TIM Group websites through a project of forestry management in Brasil. In addition, support to a project of new forestation in Milan and support for the management of the forestry area in Città della Pieve-Piegaro.

TIM, leader group in Italy and Brasil in the ICT sector, is now describing its own commitment to fight against the climate change through its websites. From today, this narration is becoming even more tangible thanks to a project of assessment and offset of the greenhouse gases emissions produced in 2021 by the 24 commercial and institutional TIM and TIM Group websites, as for istance Noovle, Olivetti, Sparkle, Telsy, Kena Mobile and FiberCop. Last year TIM Group websites reached almost 1,1 billions of pageviews, producing 900 tons of CO₂eq, which correspond to 127 world tours by car. The assessment is based on the energy consumption of the servers hosting the webpages and of all the services that are necessary to their functioning, such as for the example the heat reduction. The result follows up on the Carbon Neutrality already achieved by the website gruppotim.it, that in 2020 has offset 3 tons of CO₂eq.

The CO2web methodology, developed by Rete Clima and verified by the Certification Body  ICMQ, was used to assess and offset the emissions of the websites of the Group TIM Companies.

The CO2web methodology is based on 3 work steps:

The CO2 offset has been achieved thanks to the support to a project of safeguard of the Amazonian Forest, certified according to the VCS-Verra standard

The project of CO2 offset is Maìsa REDD+, a project that promotes the protection and safeguard of the Amazonian Forest, with the aim to contribute to protect an area of more than 28k hectares, thanks to the help and engagement of the local population.

In particular, The Maìsa REDD+ Project promotes alternative economic activities that reduce the illegal trees’ knocking down and the relative removal of wood from forests, thanks to:

These are a set of new economic opportunities offered to the local population so that it will no more be necessary to resort to illegal deforestation or carbon production.

In addition to the carbon offsetting project in Brasil, in order to offset its websites’ emissions, TIM Group will support in spring two forestry projects in Italy, aimed to increase the green spaces of urban green areas and to generate services for the area and its inhabitants.

The first one is a project of new forestation in Parco Nord – Milan, a wide urban park able to contribute to land revitalization and to a real green development of the city. Together with the 70 trees already planned last year, the TIM Group is  going to plant other 80 trees, according the Protocollo Forestazione Italiana® (Italian Forestation Protocol) of Rete Clima; these 150 planted trees in their 30-year-old average life time will contribute to the absorption of  almost 50 tons of CO2, equal to the emissions of almost 500 refrigerators, that have been working for a year. Urban tree planting contributes in fact to absorb air polluting matter, to reduce the great heat that distresses cities in summer and in general to better the living conditions in urban and suburban areas. 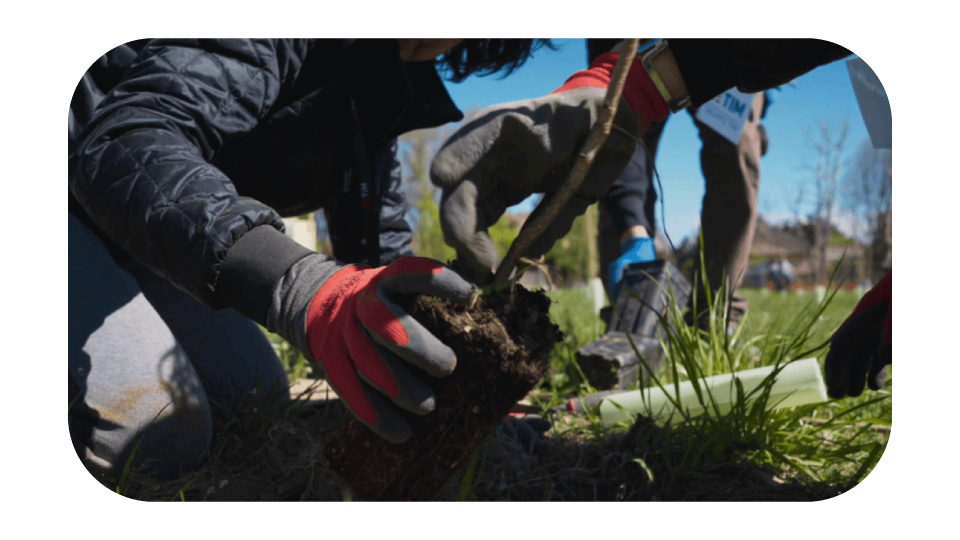 The second project supports the activity of forest management of the “Foresta di Città della Pieve-Piegaro” in Umbria, in collaboration with PEFC.

The purpose of the project called “Piante Elite” is to protect and enhance the valuable arboreal species living in the Forest of Città della Pieve-Piegaro, also promoting the future restoring of the original forest composition and preserving biodiversity. The project is based on the identification and GPS mapping of the trees and the following application of forestry management techniques to help their growing.